Brexit and the UK Job Market 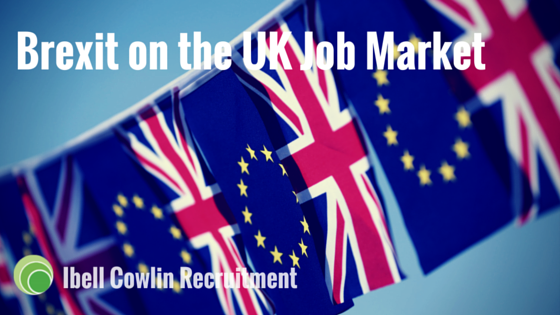 We did it! Unexpectedly, the UK decided that the population would be better served not as part of the European Union, but as a partner to it operating on the periphery of the trading block. As monumental and surprising as the result was, the decision has been made and what happens next is the subject of discussion in every corner and by every water cooler. What next? The million pound question, but one no one can answer with certainty. As sages of the commercial, political and sociological worlds (we wish), here are our (quasi-educated) predictions for the post-Brexit UK.

The furore surrounding the vote, the subsequent resignations and the appointment of a new PM and government have changed the complexion of post-Brexit Britain considerably. The recently appointed Immigration Minister has a patchy record on employment issues and is in favour of removing worker’s rights if an employee opts to become an "employee shareholder". He would also like to restrict the activities of trade unions consistently voting for tighter regulations. Mostly, he has voted against public spending to create guaranteed jobs for the young.

Damian Green, a respected and experienced MP, is the latest Secretary of State for Work and Pensions. He has voted in favour of reducing corporation tax and is keen on creating an environment ripe for international investment. Although his appointment is recent, we look forward to what his department will do to promote and encourage foreign money into the UK and bolster Britain’s existing business-friendly environment.

Boris Johnson is the Foreign Secretary! Yes, the gasps were heard around the world, but a charismatic Johnson, with a well-known international profile, should balance the issue of Liam Fox being appointed Secretary of State for International Trade (an ex-Army doctor who has spent his political career in health and defence). Together, they will crusade around the globe securing new trade deals to envy the world.

One of the most cited reasons for voting to leave the EU was immigration. The UK would appear to have developed a slight obsession with foreigners and the most obvious effect Brexit is expected to have is on the free movement of labour amongst the EU states. The Schengen Agreement is expected to form a central pillar in negotiations that will follow in the coming years.

Protectionist voting is dangerous; keep British jobs British, stem the immigration tide, send the resident immigrants home. Tribalism may have played a part, but economics should have played more of a part. In 2014 a study* was released highlighting the benefits of European migration to the UK that revealed some interesting statistics:

What do these numbers mean to a United Kingdom about to Brexit? That depends on who can stay and who will be made to leave. David Davis, the newly appointed Secretary of State for Exiting the European Union, has already suggested there must be a cut-off date at which time new migrants to the UK from the EU will not be afforded the same rights of EU citizens already resident.

With so much uncertainty, where does this leave the UK job market? Either the UK will run short of skilled workers from the EU, or the skilled EU workers will be allowed to stay thanks to the UK retaining free movement of labour, or the UK will invest billions getting the UK workforce up-to-speed to replace the EU workers that have been forcibly deported, or the UK won’t invest billions to replace skilled EU workers and the country will be ruined. Who knows? No one. But the coming years are going to be incredibly exciting!

*Fiscal Impact of Immigration to the UK, Economic Journal