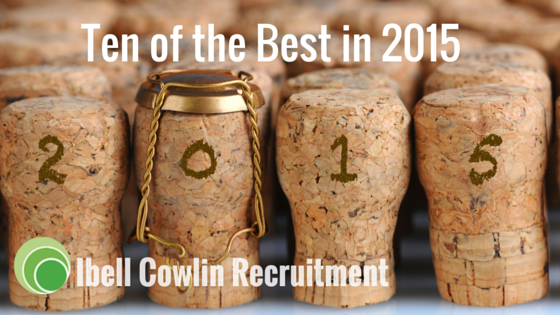 2015 has been a very busy year, as most are, and with lots of events to remember, some good and some not so good at all of course. We will obviously not forget the tragedies of 2015 and our thoughts are with those affected, but, in the spirit of ‘Christmas cheer’ we wanted to round off the year with some positives, some of them perhaps not so obvious or apparent.

…so here is the Ibell Recruitment & Staffing lowdown on some of these highlights.

It all started when pictures of a large man dancing were posted online with the comment 'Spotted this specimen trying to dance the other week. He stopped when he saw us laughing.' Outraged by the cruel comments, a group of people began a global search to track the man down, who was discovered to be Sean from London. He's since been invited to a party in LA, that was held in his honour and DJ'd by Moby.

When 21 year old Katie Cutler found out that a disabled pensioner, Alan Barnes, had been viciously mugged on his own doorstep, she wanted to help. She set up a donation page, hoping to raise £500 but a week later had raised over £330,000.  Alan has used the money to move away from his old home, which now holds unhappy memories of the attack.

Mustafa Mawla stood blindfolded on a Canadian street with a sign on his feet saying, “I am a Muslim. I am labelled as a terrorist. I trust you. Do you trust me? Give me a hug.” Dozens of passers-by stopped and hugged Mustafa.

On May 2 2015, Kate and William welcomed their second child to the world. Princess Charlotte was born at St Mary's hospital in London weighing a healthy 8lb 3oz.

5. Women Are Allowed to Vote in Saudi Arabia for the First Time

At least 17 women have been elected to public office in Saudi Arabia since women were allowed to vote for the first time.

979 women candidates and 130,637 women voters registered to participate in the elections according to Saudi officials.

We've all heard of 3D printers, but this year the first model designed for home use was released and the good news is that it's only £850! It requires no specialist knowledge to use, as it automatically adjusts its own settings and is small enough to fit on a table.

Millions of genetically modified mosquitoes have been released in Brazil to help in the battle against dengue fever. The mosquitoes are all males and they carry a gene that causes any larva they sire to die before maturity

The GM mosquitoes were designed at Oxtec laboratory in Abingdon, UK and bred ‘en masse’ in a factory in Campinas.

After two years of negotiations, an agreement has been reached between Iran and six world powers to limit the country's nuclear capabilities.

Under the final agreement, a UN weapons embargo will stay in place for five years. There is also a ban of eight years placed on Iran buying missile technology. The deal wins Iran sanctions relief in exchange.

China is to allow couples up to two children in a new policy decision. The controversial one child policy was introduced in 1979 to slow population growth. Couples who violated the law faced a variety of punishments, including forced abortion.

Concerns at China's ageing population and falling worker numbers have prompted the changes.

On October 9th 2015, John Lennon would have turned 75. For the occasion, some of today's biggest stars joined forces with Beatle's Ringo and Paul to honour the legend with a show broadcast from New York. Joining the line-up were Steve Tyler, John Fogerty, Aloe Blacc, Sheryl Crow, Willie Nelson and many more. Kevin Bacon hosted the event.

So there you have it…just a small selection of some of the positive and inspirational events that have occurred in 2015.

Have a very Merry Christmas and a great New Year!...let's see what 2016 brings.