Why Shopping for Christmas Cards in September is a Bad Idea 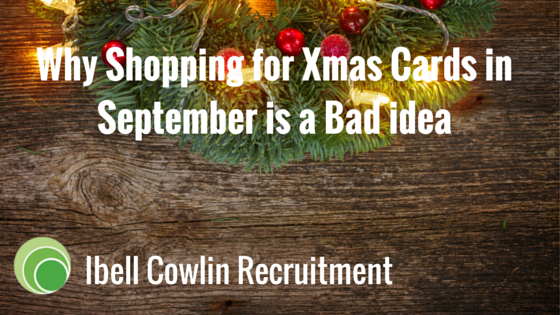 Whilst shopping in a supermarket just a few days ago, I passed an assistant packing a shelf with Christmas products.  A fellow shopper stood watching and muttered “not already”.  One shelf was filled with Christmas cards and I thought “why do some crazy people buy them so early?”  It seems we have already entered the race to fill the shelves with Christmas stuff and Christmas seems to be arriving ever earlier, maybe there should be a competition every year for retailers.

Let’s not be cynical, we love Christmas, but is the early arrival about our passion for Christmas or a widening commercial window for shops, stores and charity organisations?  Retailers bombard you (they want to make sure they make a profit), and if one starts throwing Christmas in our faces in September, they all will.  None of the shops want to lose the Christmas race, but with each year that Christmas is delivered earlier and earlier to us, are our retailers killing the magic of Christmas?

It’s not only supermarkets gorging on a Christmas love fest, it’s also the large stores in big cities who start planning Christmas as soon as the last one has finished.  For instance, one large store in London has already dedicated a floor to the festive season this September. Should Christmas really last three months?

Whether the public think it too early to be shopping for Christmas or not, one international store has had a positive feedback from customers, stating that they prefer to carefully plan and budget their Christmas with no last minute rush. Some consumers like to spread the expense of buying Christmas products earlier, rather than waiting until December. It makes sound financial sense to spread the cost of Christmas, but in September we still have that summer feeling and the thought of Christmas seems a very long way off.  Do we want to think of Christmas cards in September? No. Never. In fact, at this time of year, we’re still dreaming about late summer holidays! But we’re not Scrooges and it is one time of the year that has an amazing feel-good factor.  Christmas cards do not take up a lot of shelf space and people can walk past it if they don’t like it.

The team at Ibell Recruitment & Staffing always looks forward to Christmas. The buzz and excitement that comes with it in the office, with decorations going up and the Christmas tree being trimmed, always lifts everyone’s spirits.  There are Christmas dinners, parties being arranged and gifts to be bought.

We took a very informal poll amongst friends and colleagues, and - the results weren’t surprising. Yes, everyone agreed, retailers are bringing Christmas to shops far too early, but almost everyone confessed to already having started their Christmas shopping as a result. It may come earlier every year and it may be becoming ever more commercialised, but no one in this office has lost that Christmas spirit yet, just the will to go shopping!